A machine for All Seasons. EIK’s patented ‘multi-synchronous direct drive’ system is credited for being the pivotal technology that positions us at the forefront of amphibious excavator products.  This paradigm shift in how modern amphibious machines are designed has won over the hearts of numerous customers, for both new and experienced amphibious excavator users.

Due to our growing population and desire to improve quality of life, over-consumption of natural resources and unrestrained urbanization has accelerated the degradation of our natural environment. The importance of environmental protection requires no further elaboration; yet we typically only relate to its impact on human life. In fact, this upsetting of the ecosystem could be more adverse to wildlife than to humans.

Wetlands are home to various species of plants, reptiles, birds and mammals, including many endangered species. Wetland conservation aims to provide a favorable environment for these animals to thrive. This is an ongoing effort to restore areas that have been degraded either by human activities or natural disasters such as floods, hurricanes, or earthquakes.

In addition, conservation works also provide many other tangible benefits, such as improved flood control, clean water, recreational opportunities, preserved aesthetics and climate regulation. These are often referred to as “ecosystem goods and services”.

However, wetland conservation can be a challenge. Wetlands vary greatly in size, ranging from a few acres to several hundred. Miles of dikes for controlling the water level are often constructed within the wetland, forming a maze of embankments, and are the only access for land vehicles.

The conservation project in this case study is a rice field spread over hundreds of acres in the East Coast, and a carefree habitat for waterfowl, alligators, and other native wildlife. A recent hurricane and floods have wreaked havoc, causing damage to the wetland, disrupting the balance of the ecosystem and threatening further degradation if no intervention is carried out. Immediate action is called for to clear debris and reshape terrain. 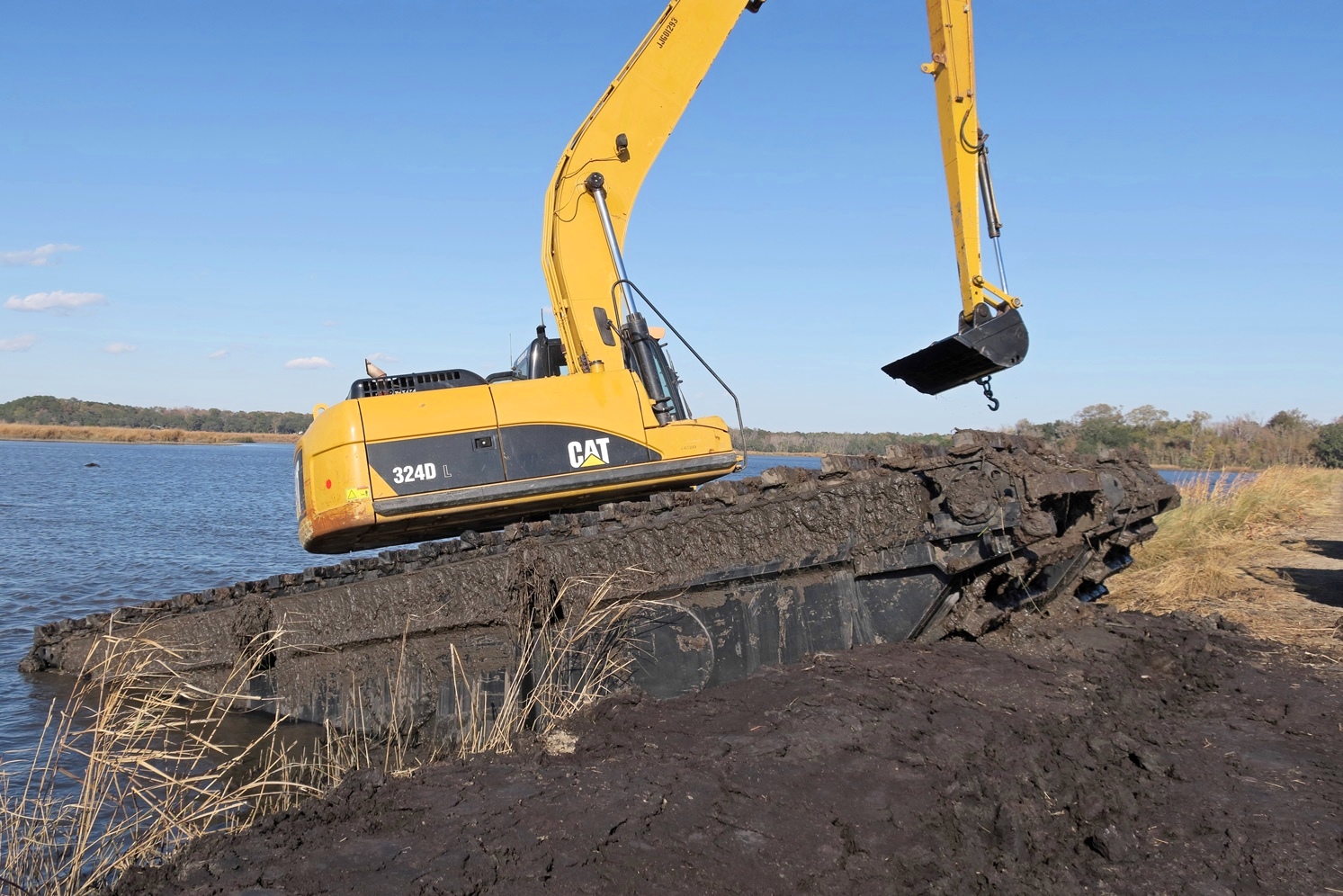 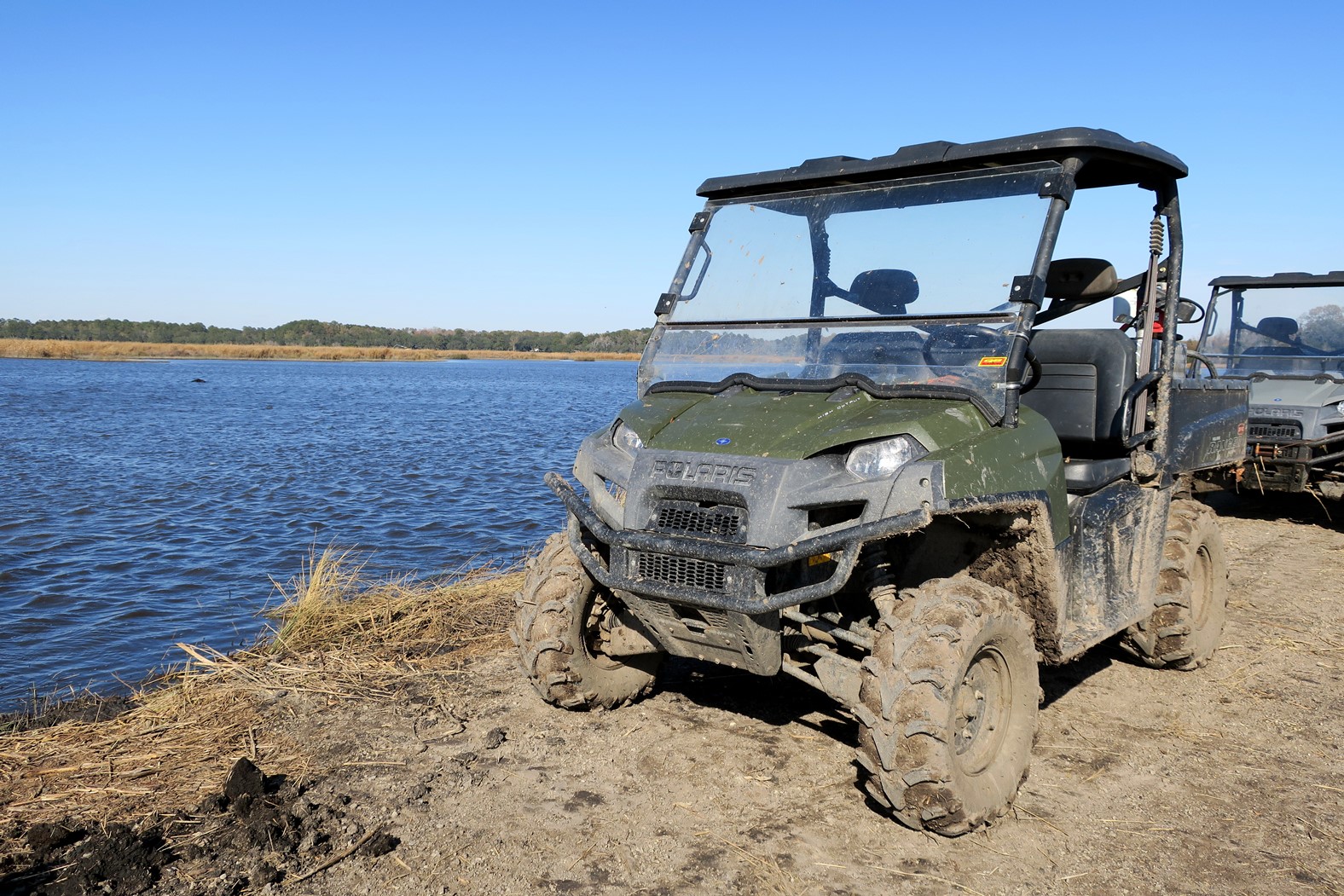 Embankments built across the rice field wetland to control water and double up as access roads.

The Race Against Time

Before the introduction of the amphibious excavator, standard crawler excavators were the only option available to contractors undertaking such jobs. The wetland is linked to a river, and the water level fluctuates around 5 feet. It is always a race against time to take advantage of the small interval when the water level is at its lowest. To make matters worse, the ground in the wetland is extremely soft – standard crawler excavators will sink into the mud without trekking paths, which are extremely tedious and labor-intensive to build. They begin with a layer of wooden logs to form the foundation, followed by heavy duty mats placed over the logs to create a path. To travel, the machine must constantly swing its arm 180 degrees back
and forth, transferring logs and mats from back to front as it moves toward the desired spot.

This non-productive, yet necessary, process repeats itself when the machine moves to the next repair site, and again at the end of the day going back to the depot. As much as 50% of the effort goes into the construction of the trekking path as actual production work, taking up precious time and burning costly fuel. By the time the high tide comes in, not much has been accomplished.

Do More With Less

Contractors have been battling this slow and punishing method for years, but struggled to come up with a more efficient solution. Enter the amphibious excavator: with large self-propelled pontoons coupled with caterpillar tracks on each side, its large footprint creates a very low ground pressure, enabling the massive excavator to maneuver unconstrained in very soft terrain. The entirety of a wetland can be accessed without any trekking paths. The amphibious excavator has triumphed in such adverse conditions and proven to be an extremely efficient machine where standard crawler excavators fail miserably. 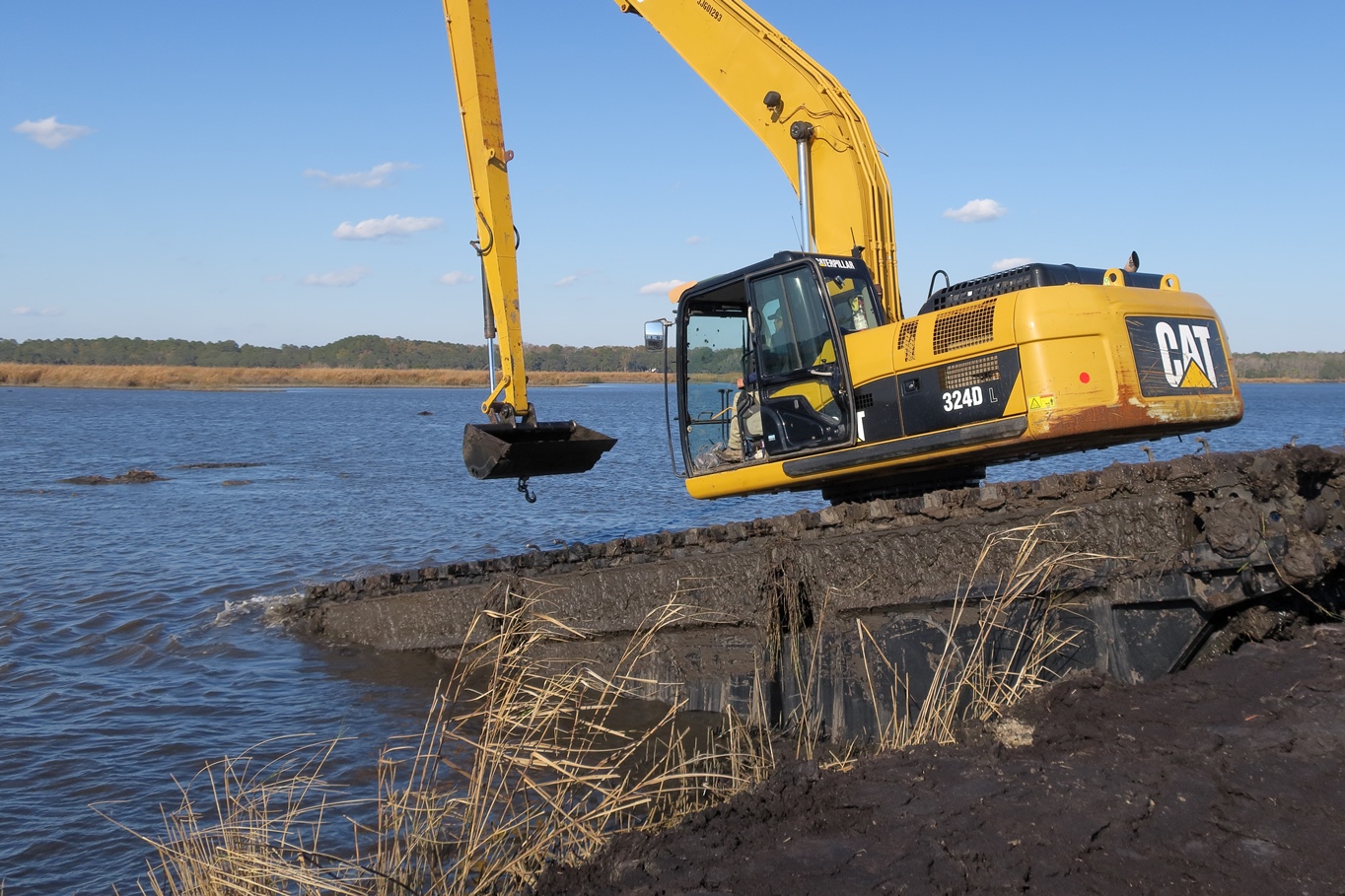 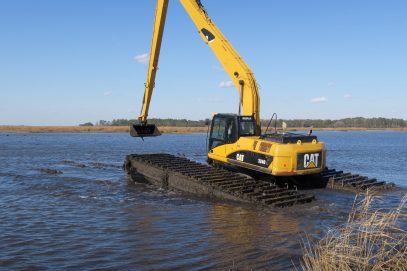 For this wetland, the use of logs and mats in conservation and maintenance work is history. EIK’s amphibious excavator has once again proven its worth working in wetland, swampy areas and any soft terrain. Shortly after, a second similar unit was added to the job site. The contractor now saves time and cost on unnecessary material and processes, channeling investment directly into equipment that elevates efficiency to a whole new level. A classic example of ‘More with Less.”

A Machine for All Seasons

Winter, when wetlands are frozen, is the only season when standard crawler excavators can work effectively. The amphibious excavator, on the other hand, is an all-season soft terrain machine. Jobs once considered ‘seasonal’ can now continue throughout the entire year. It is no surprise that EIK’s amphibious excavators have made their way to every continent except Antarctica – but we are probably not far. Helping customers save cost and protecting the environment is a fulfilling task that we enjoy. 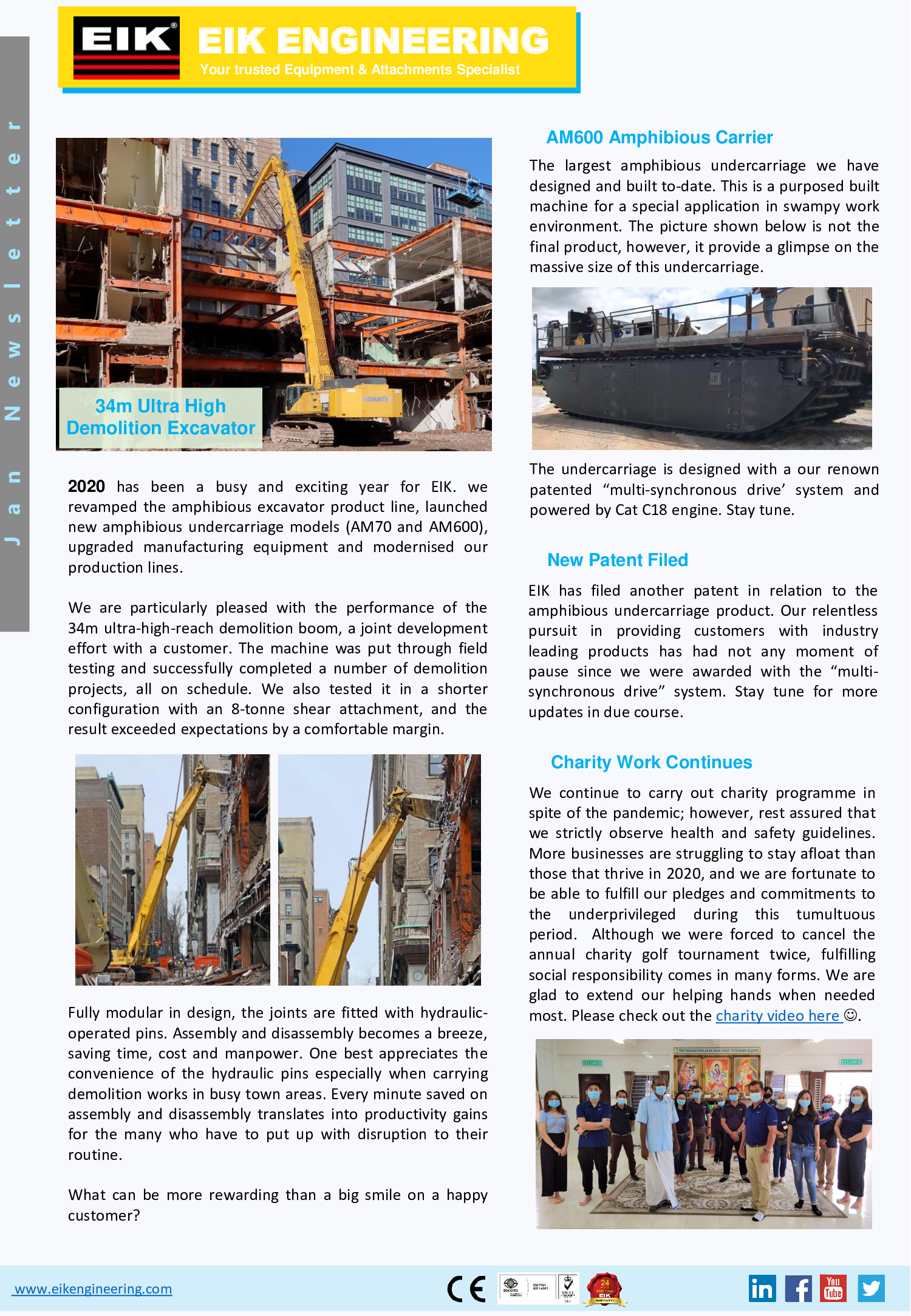 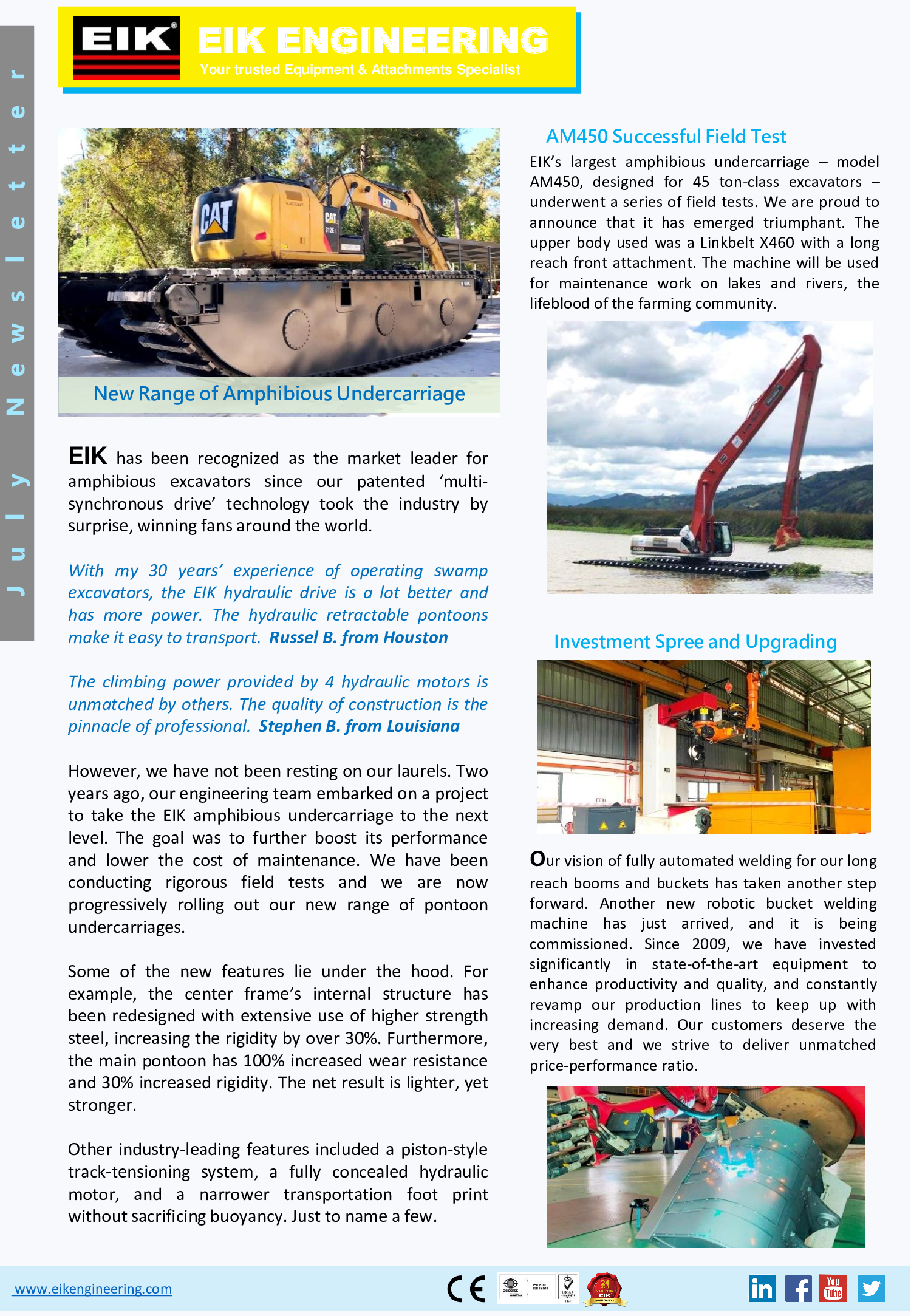 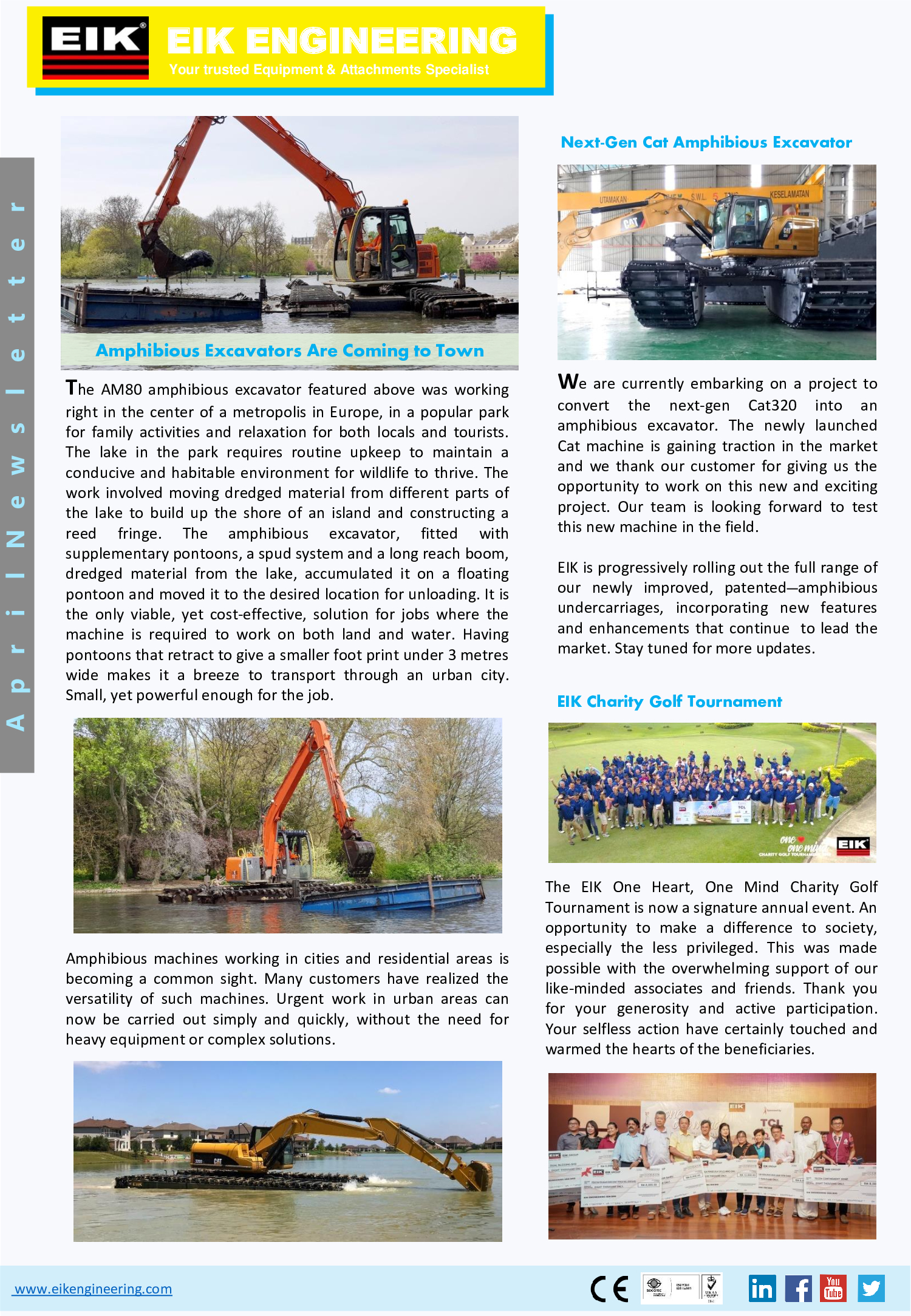 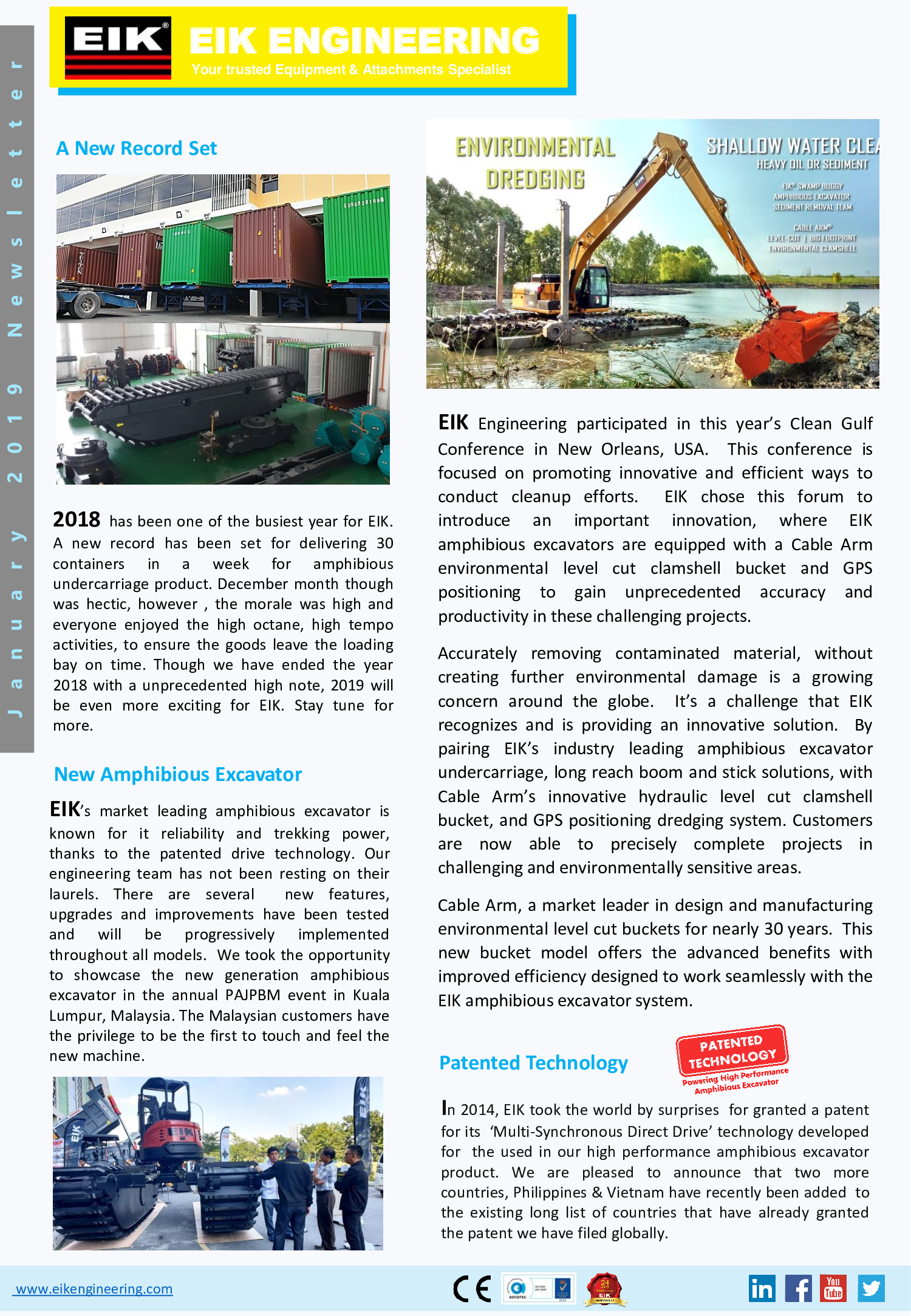 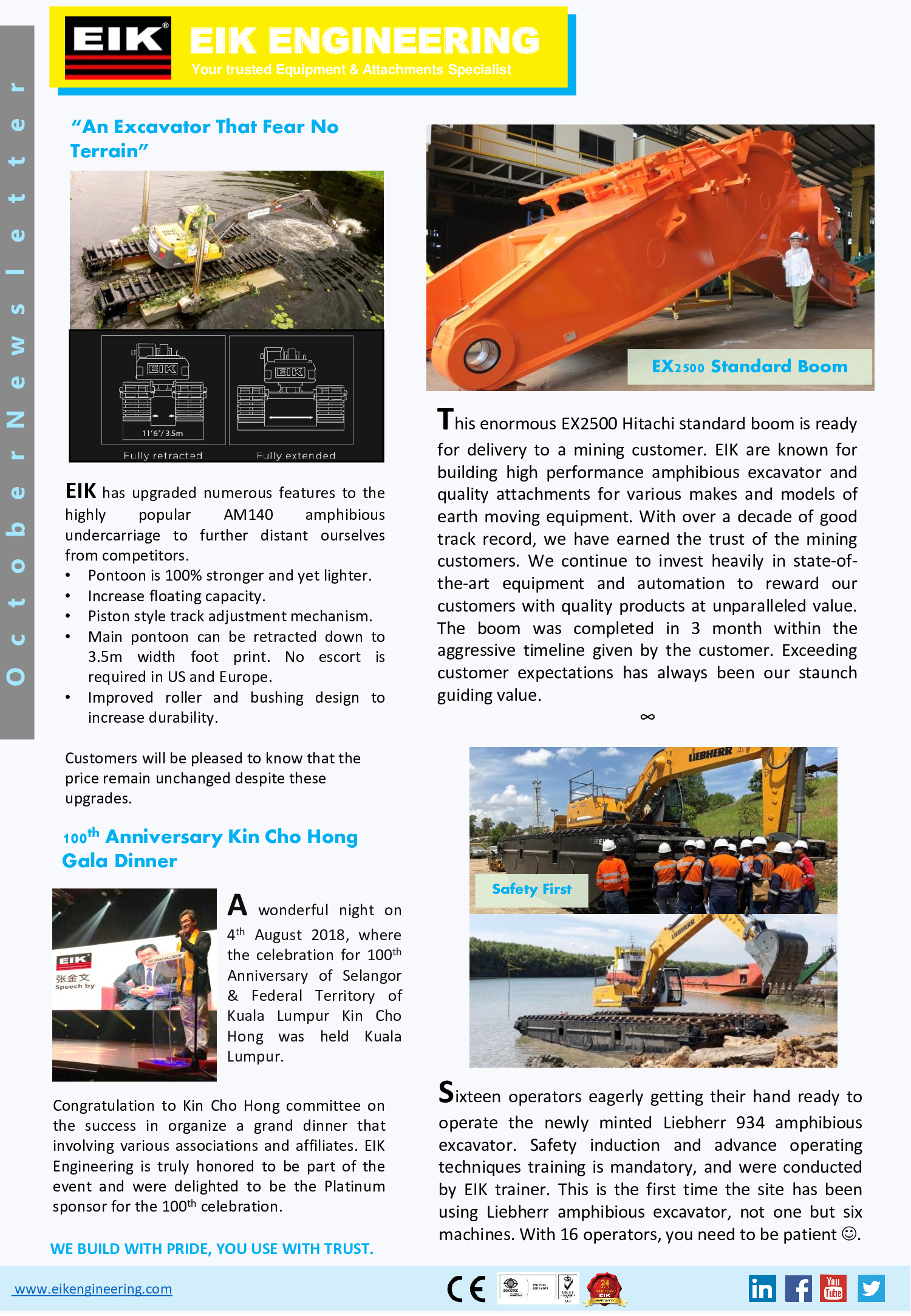 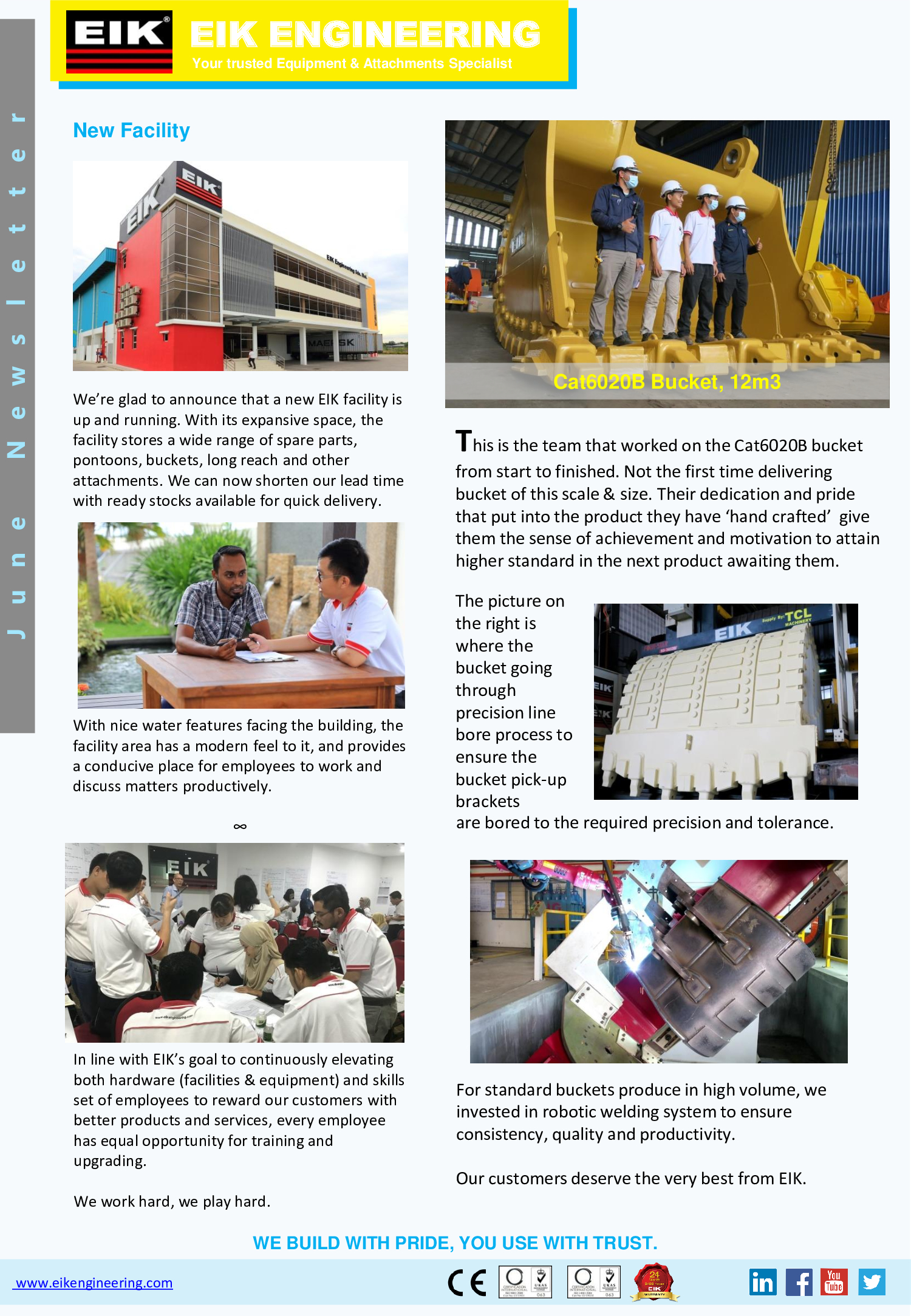 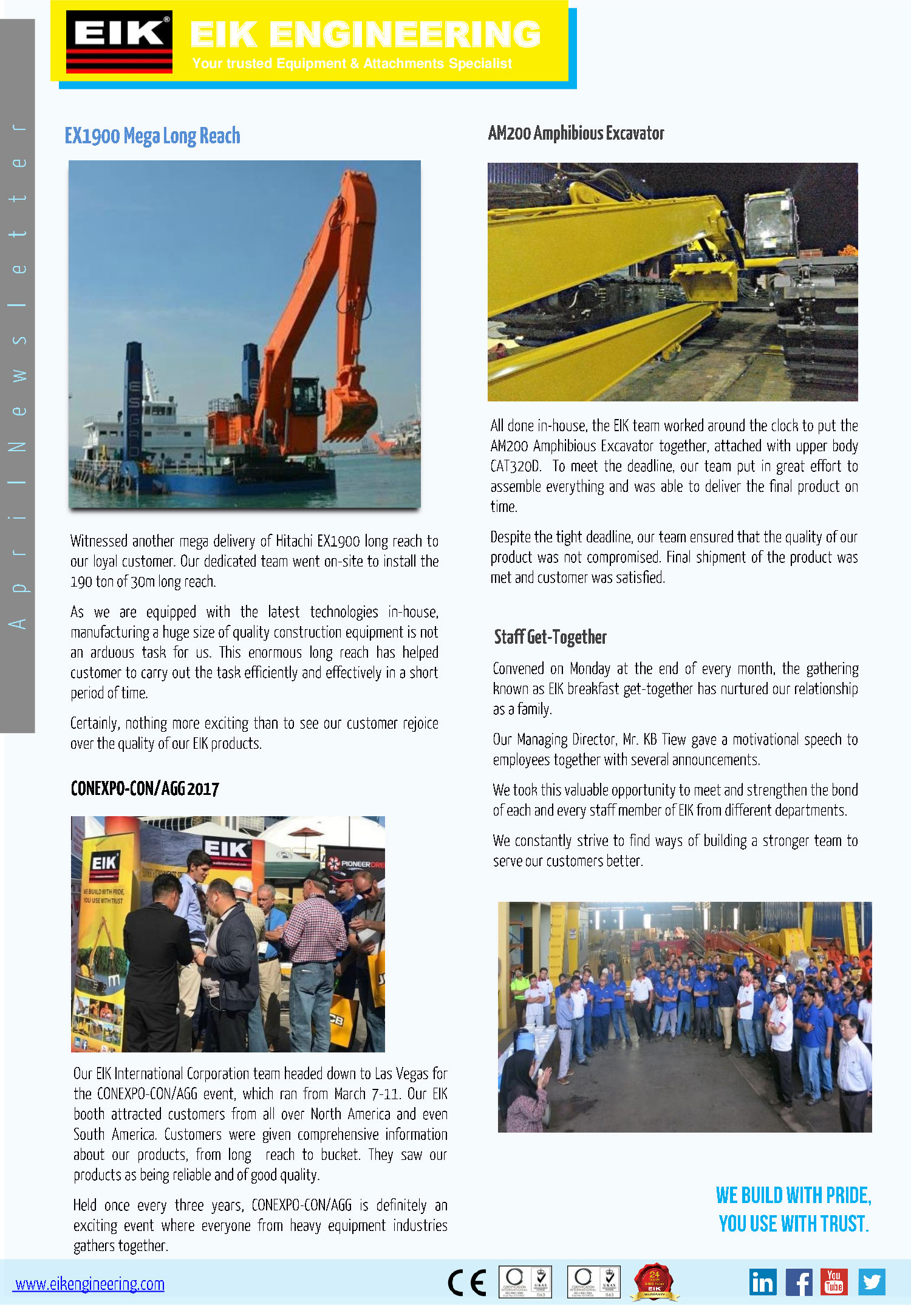 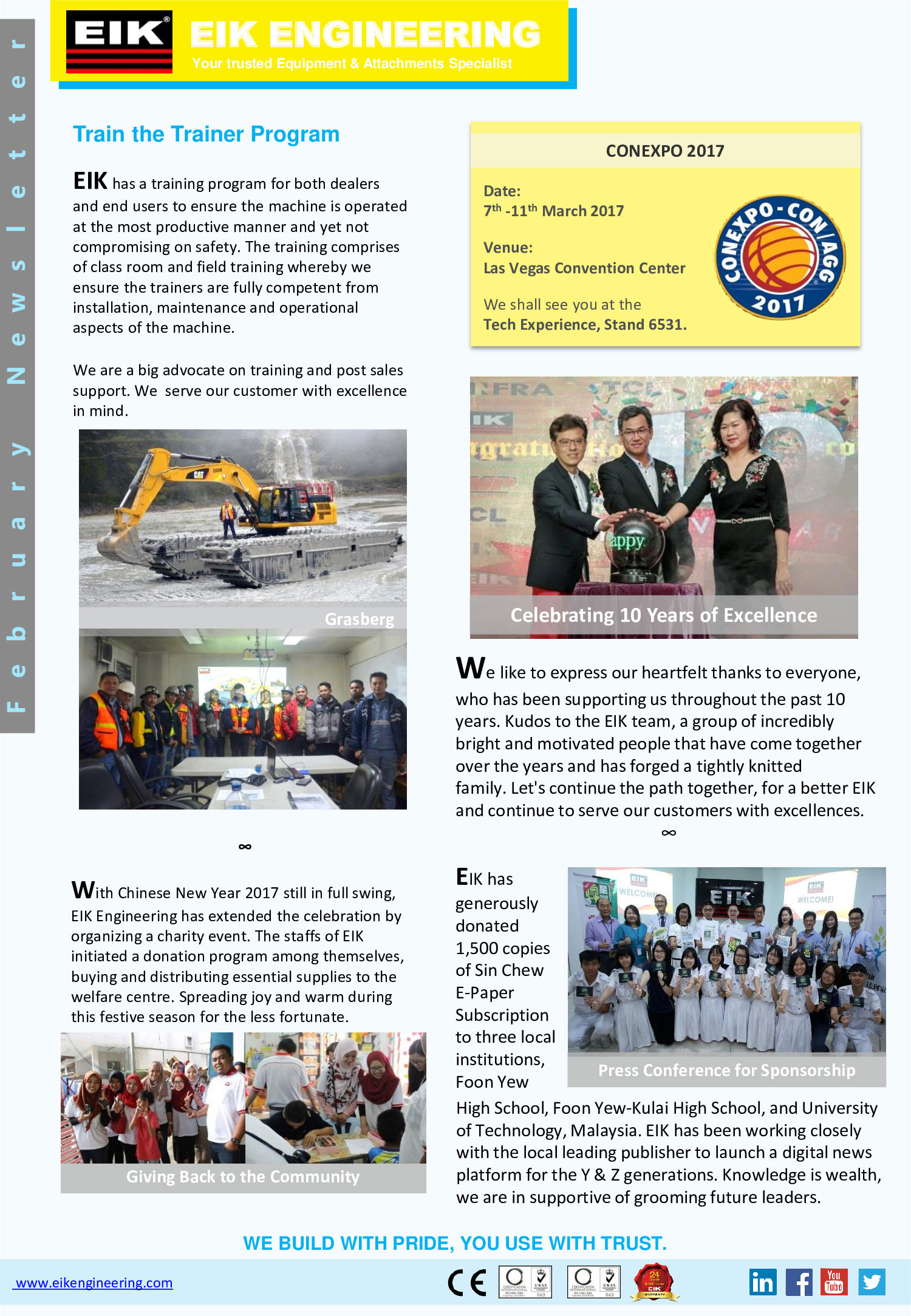 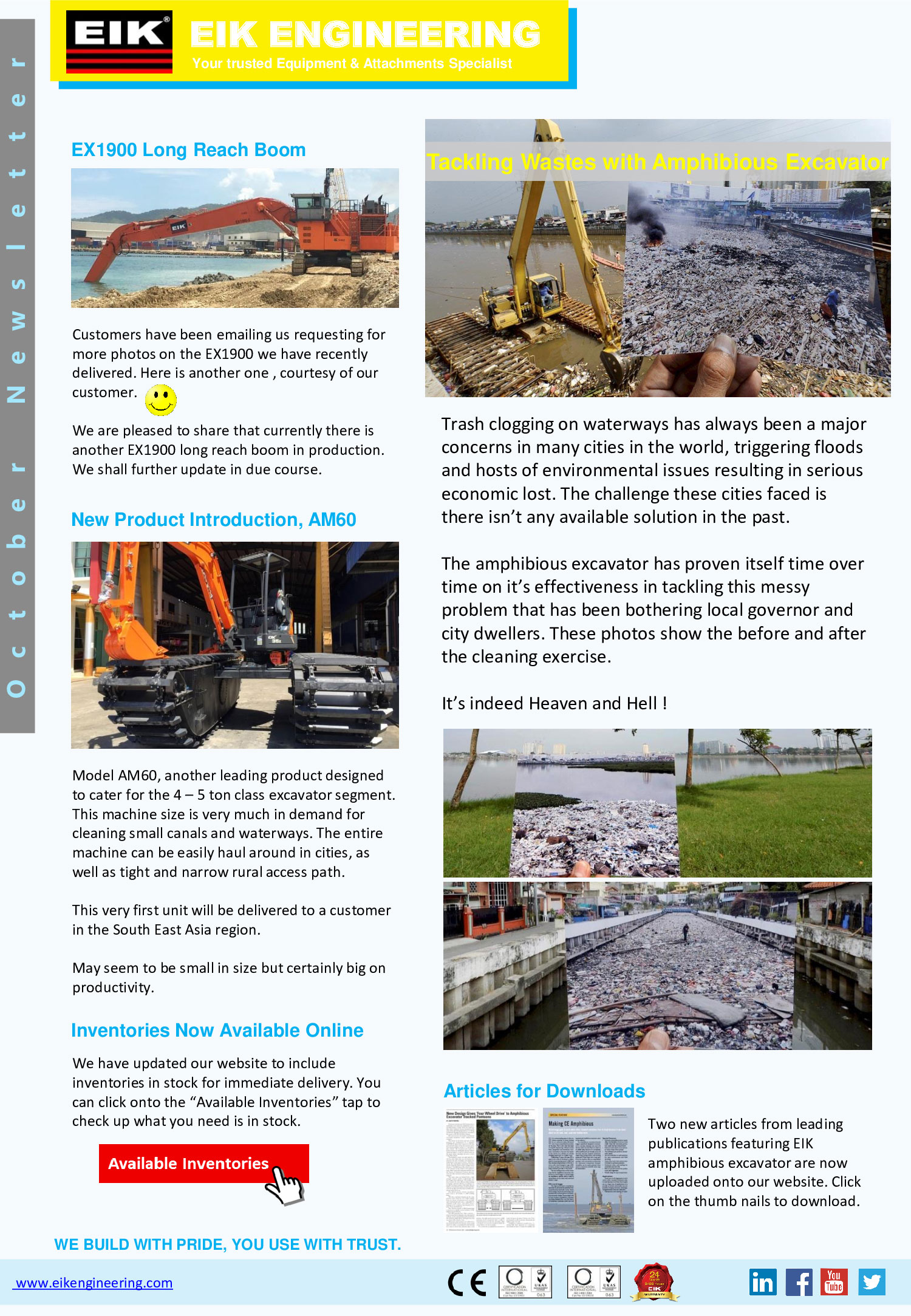 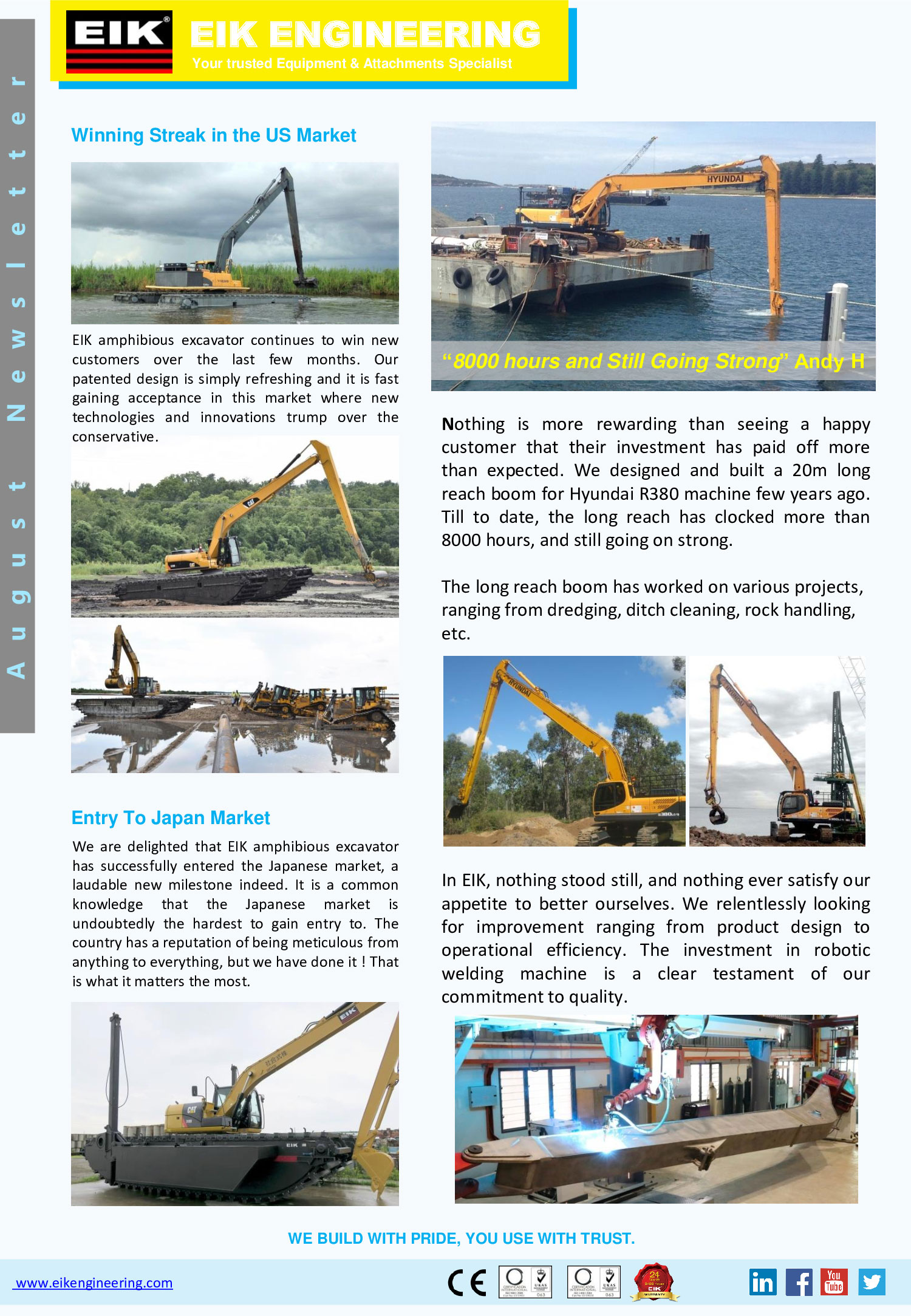 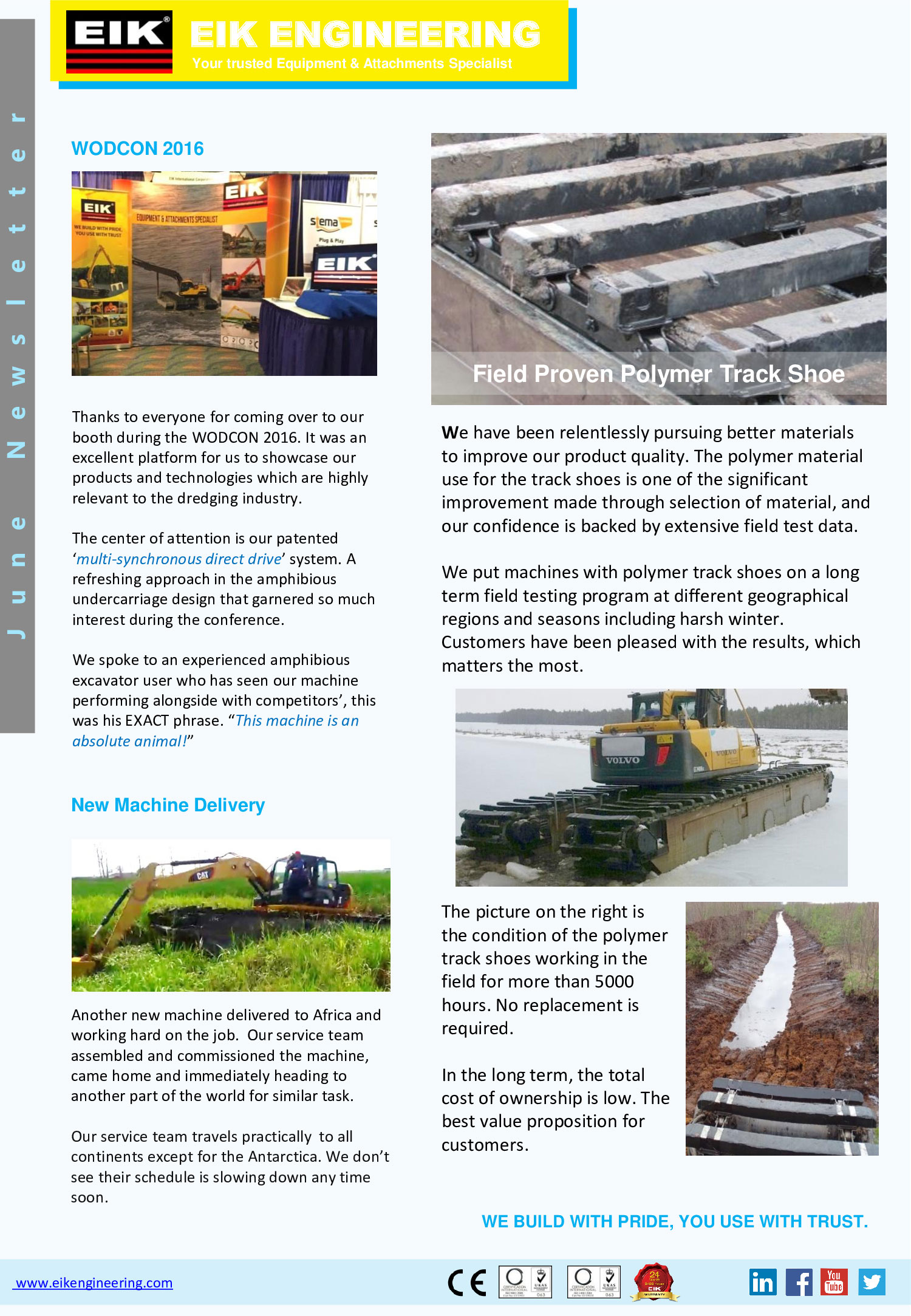 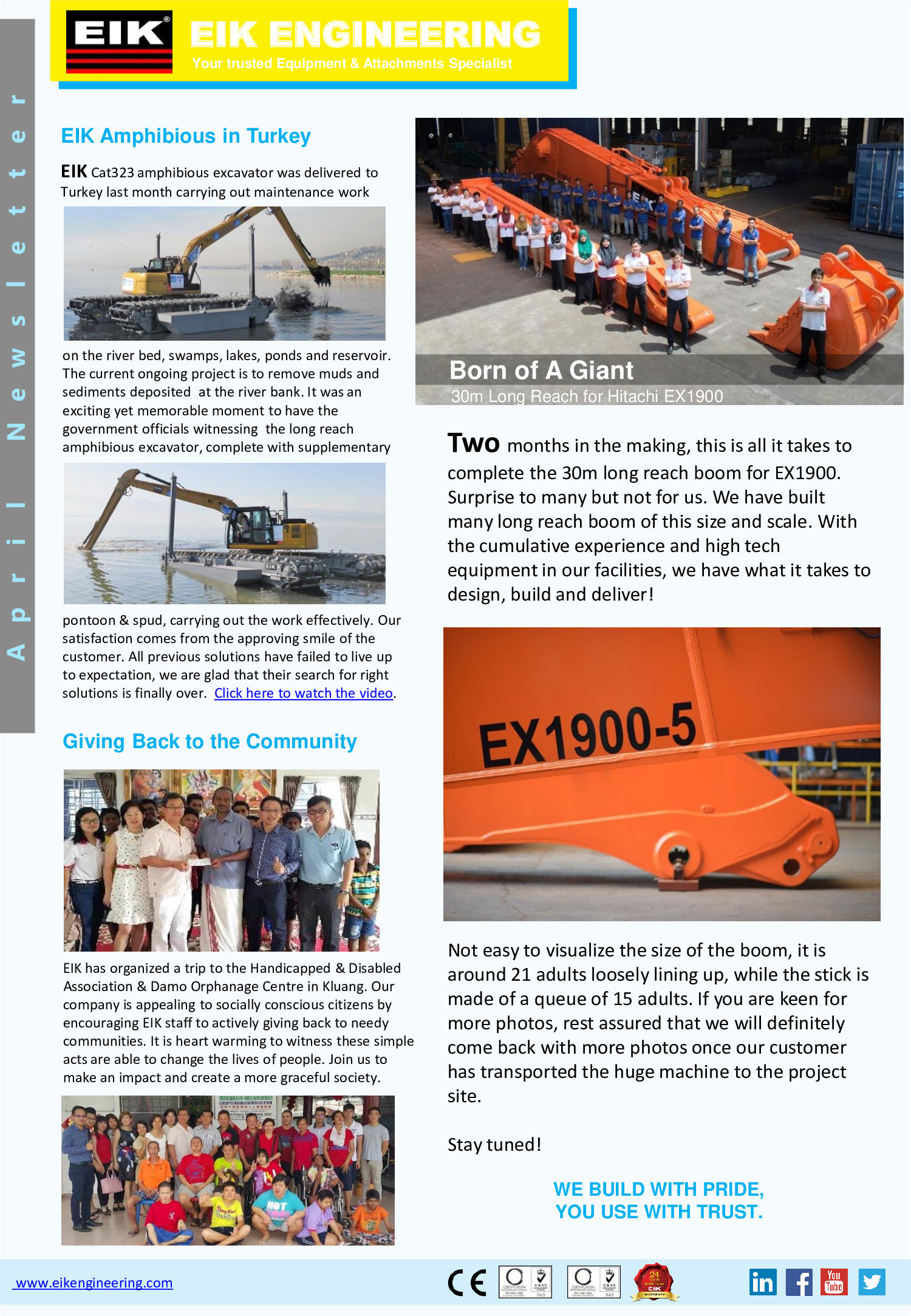 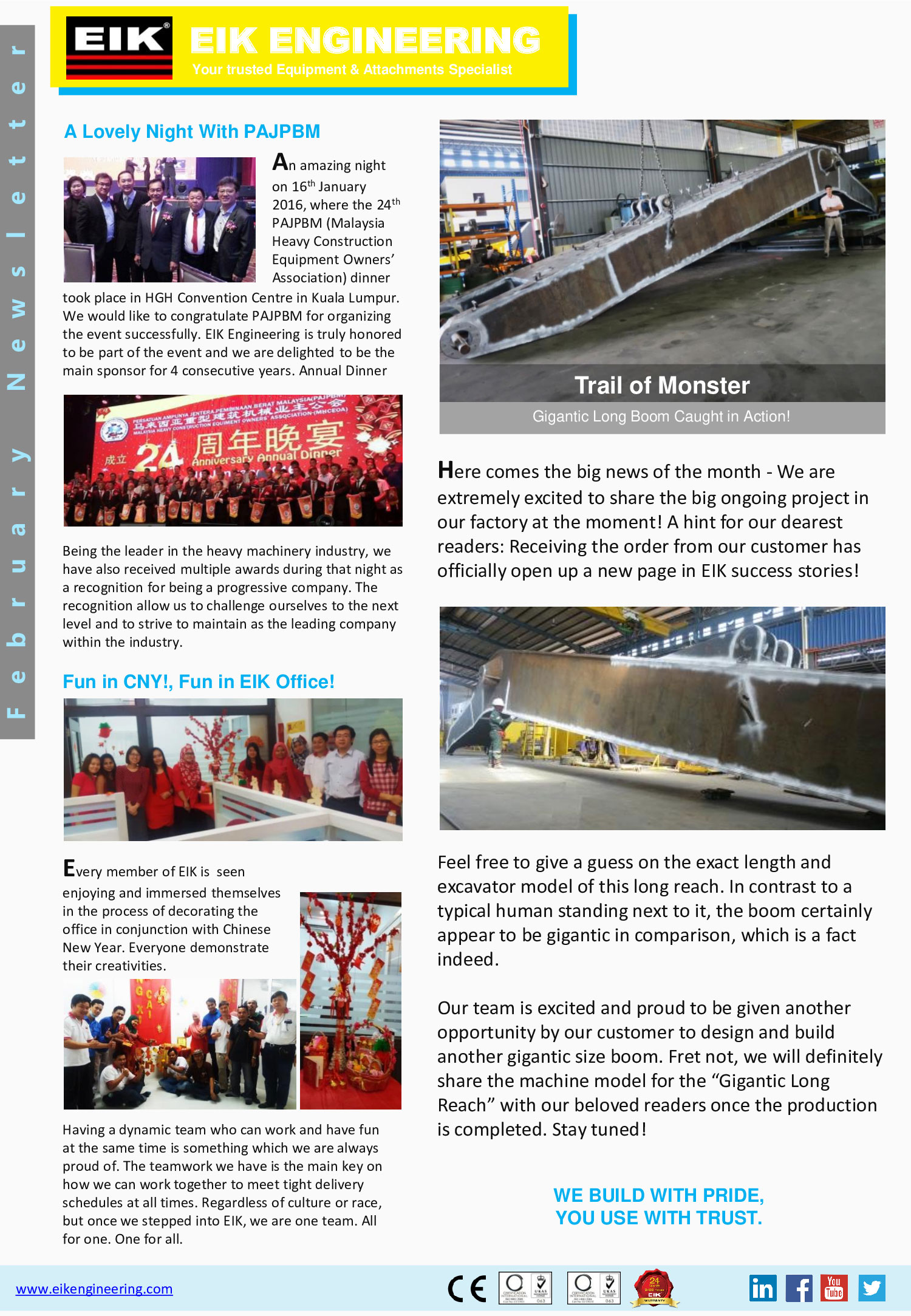 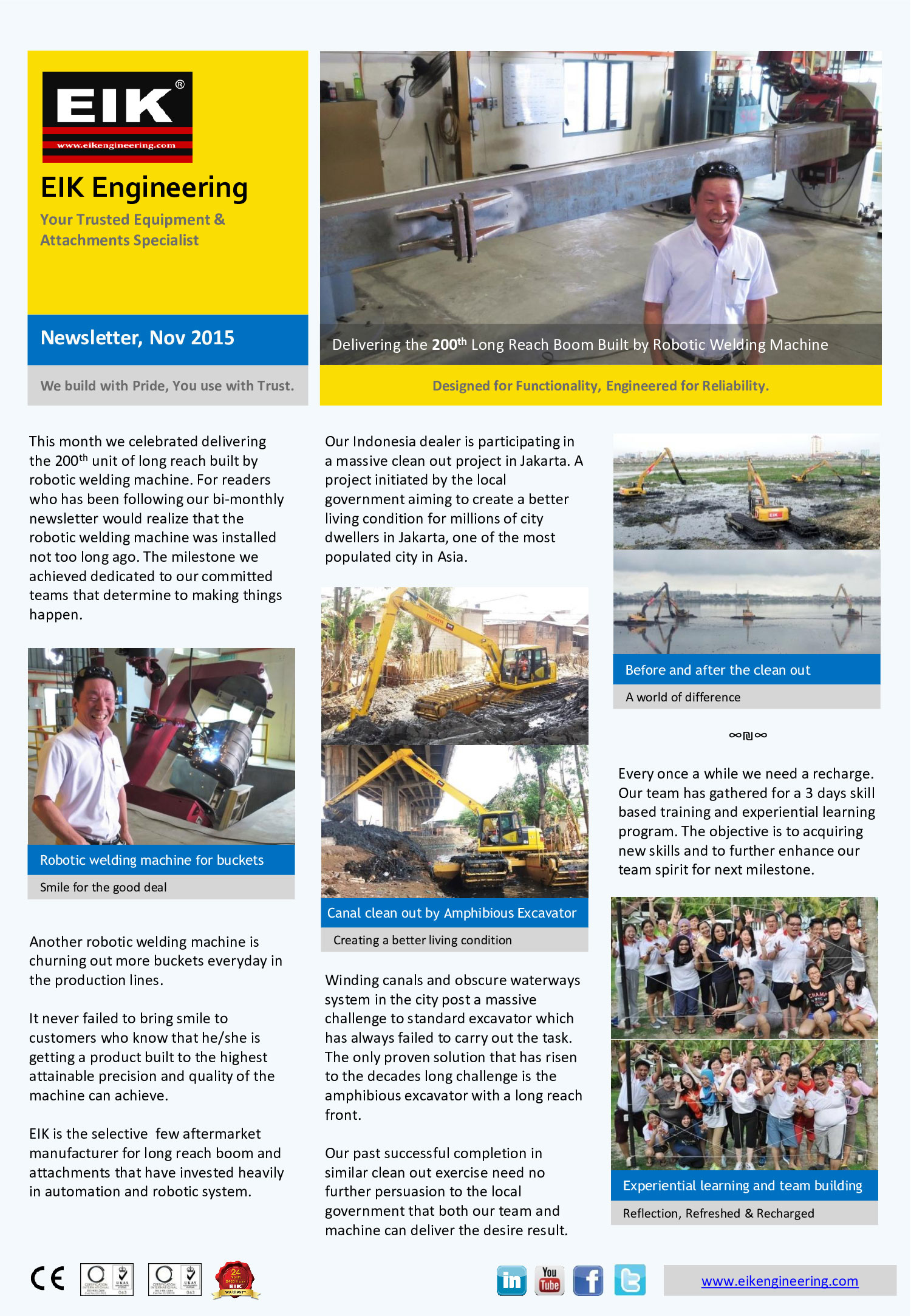 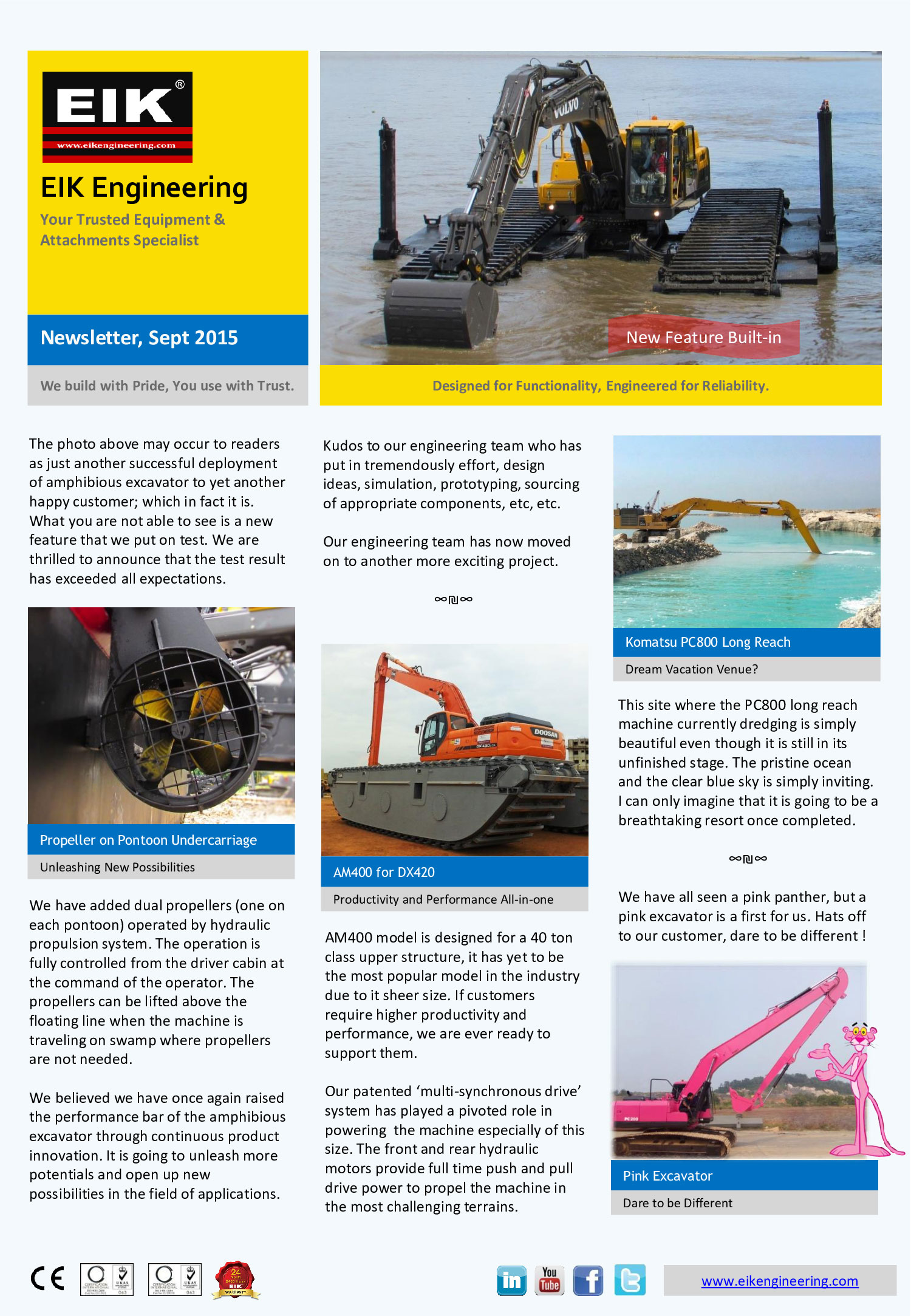 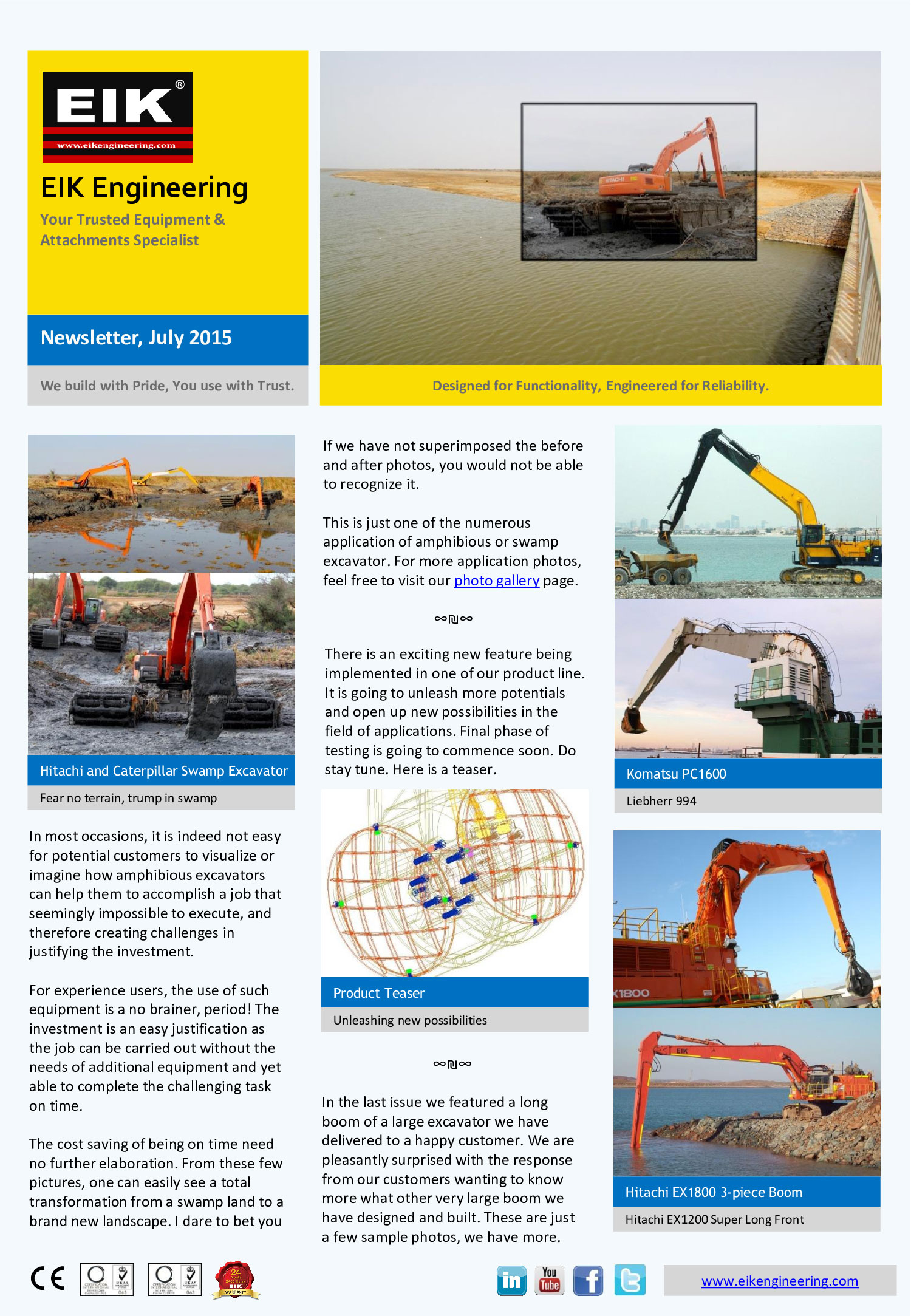 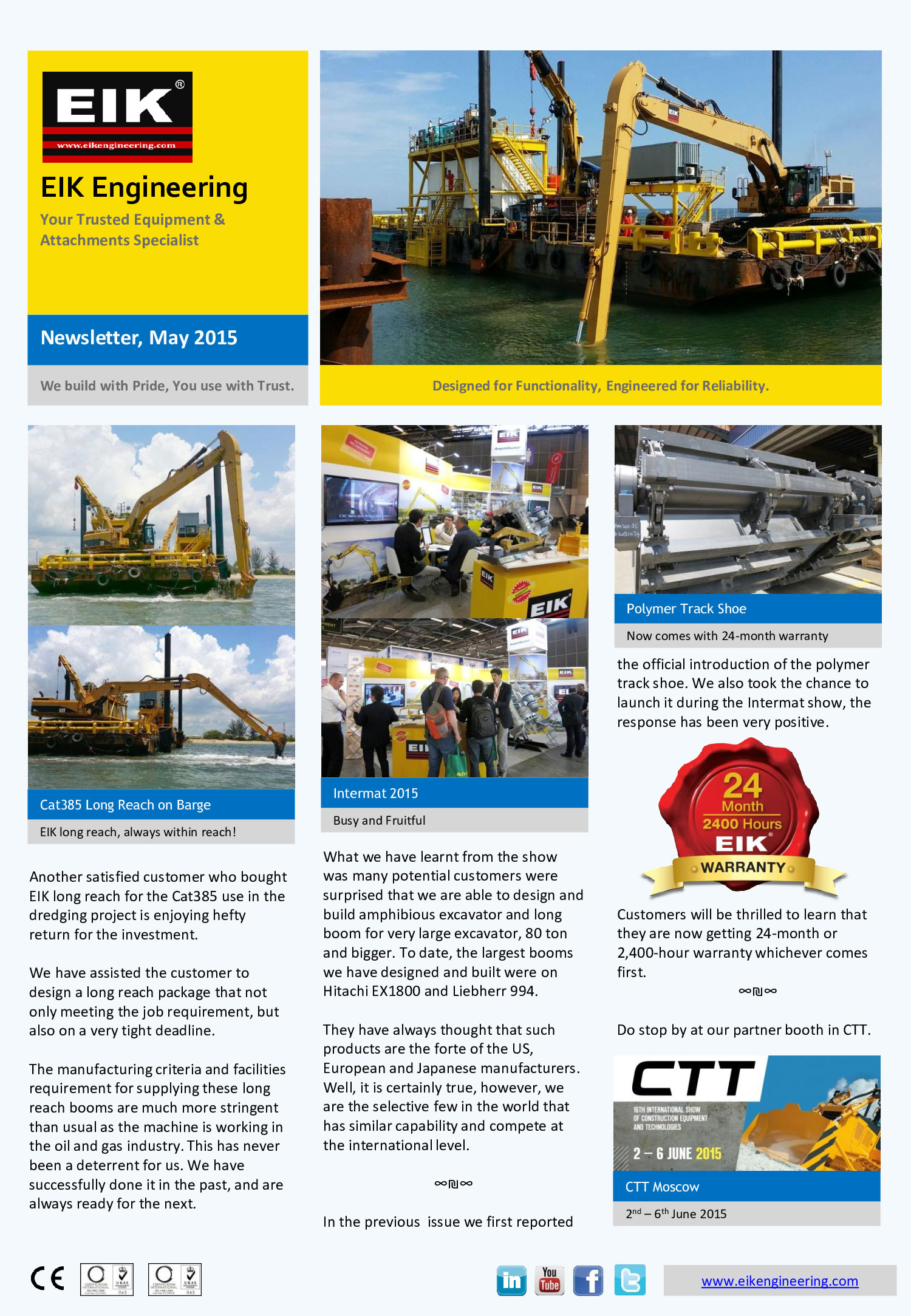 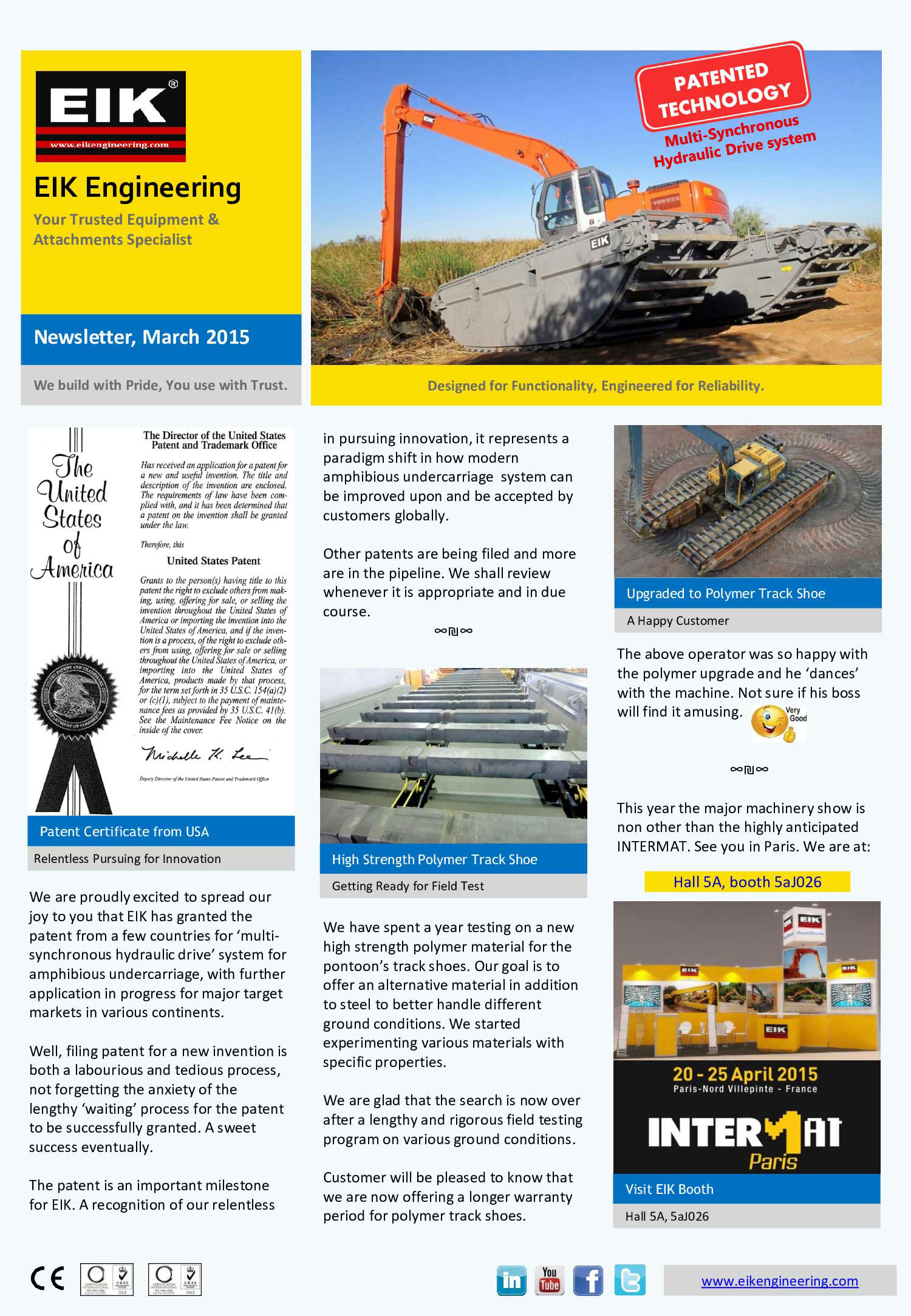